Throughout its 65-year history, 4-H Camp in Monticello, IL has relied almost exclusively on donations to build, expand, and renovate.

By the time 4-H Memorial Camp was conceived in 1944 (less than a year before the end of World War II), Illinois 4-H members were no strangers to supporting a cause. 9,817 Illinois 4-Hers fought in the war, while countless others actively contributed on the home front. They salvaged rubber, metal, paper, and other useful materials for the "Salvage for Victory Program." They planted victory gardens and learned food preservation. In one of their most notable drives, Illinois 4-Hers donated three ambulances to the American Red Cross after raising over $4,500.

In September of 1944, with the war coming to a close, the Joint 4-H Advisory Committee proposed a memorial for 4-H members and alumni who lost their lives in battle. It was ultimately voted that this memorial would be a State 4-H Camp.

The camp was to be funded entirely by donations, with the committee setting a budget of $1 million over 10 years for the statewide camping program. With only $420 left from previous wartime fundraising, 4-H club members were tasked with collecting nearly half of the $1 million sum, with individual donations from 4-H supporting businesses making up the rest.

In July of 1946, young philanthropist, Robert Allerton, made a donation of 250-acres from his estate in Monticello, IL to house the camp. Enthusiastic about the cause, he also offered his neighboring mansion for 4-H use.

With the land acquired, it was left to 4-H executives to devise a funding plan. The fundraising goal for each county was calculated by 4-H club membership x $1 x 10 years. In today's dollars, that was about $12 per 4-Her per year. As an additional incentive, the first 30 counties to raise $1,500 were given the privilege of naming a cabin.

Piatt County, one of the counties to earn naming rights, earned a third of their goal by hosting a community jamboree. The event featured "fried chicken plate lunches, a pie auction, cake walk, and a raffling of a turkey along with 23 other prizes." 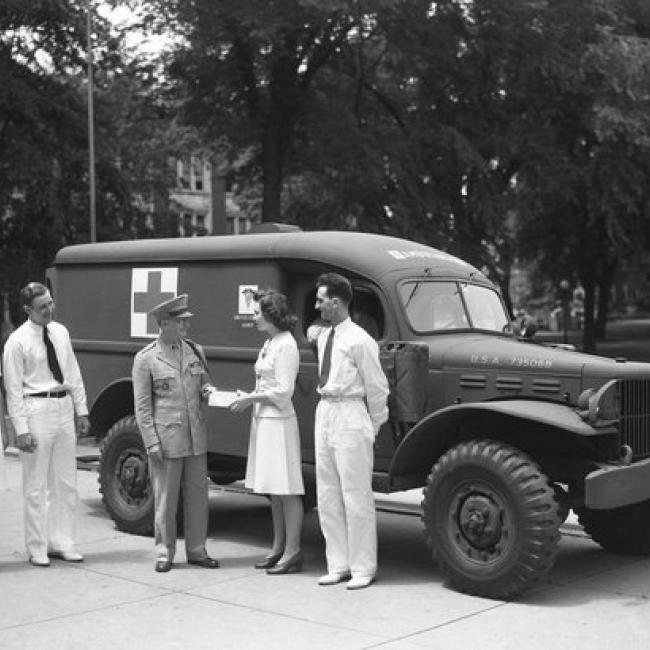 4-H Club Members presenting an ambulance to the Red Cross. 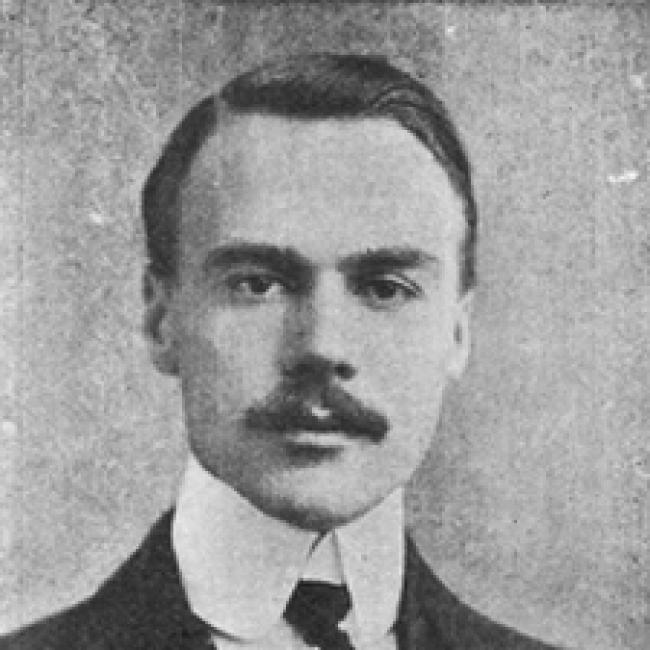 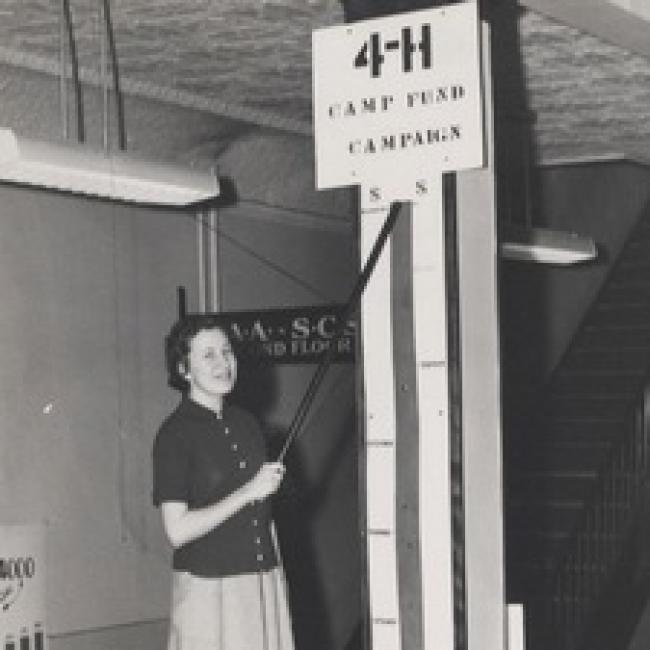 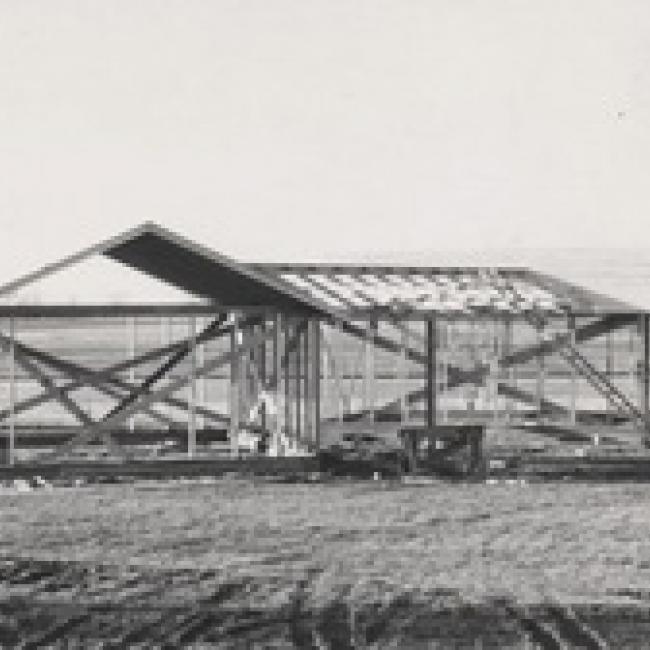 The first cabins being built.

Buildings were constructed as funds became available. By 1948, a dam creating a two-acre lake was built, as well as a shelter, bathroom, and wellhouse. While still in the beginning phases of construction, 4-H Memorial Camp opened for the first time for rudimentary camping in July, 1948.

By 1950, the 4-year funding blitz began to wane – so much so, that construction came to a halt April 1 due to lack of funds. Key projects such as the dining hall and sanitary facilities were left unfinished. Having firmly decided against borrowing funds, committee members feared the camp would have to remain closed for the year.

Hearing the news, Wilkinson Lumber Co. offered to advance building supplies without interest until January of the next year. Frank Mynard, Specialist in 4-H Club Work, explained, "Without this show of faith by [Wilkinson Lumber Co.] in the ability of 4-H members to raise the funds that summer, the development of the camp would have been delayed for some time."

With the advancement of supplies, 1950 became a landmark year for construction. The dining hall and kitchen, toilets, and first cabin for campers were completed in time for opening of summer camp.

The brand-new facilities sparked new interest in camp funding and 4-Hers were able to successfully reimburse Wilkinson Lumber on time. After the Illinois State 4-H Junior Leadership Conference was held at the camp, the delegates returned to their homes to stimulate even more support for the camp. By December 31, 1950, $131,524.86 had been raised.

Throughout the following decades, more and more facilities were added: dozens of cabins, a diving tower, boat docks, sewage facilities, a recreation shelter, a health center, a craft shop, offices, a laundry building, sporting courts, and more. The lake was also eventually expanded to 16-acres and included a beachfront. 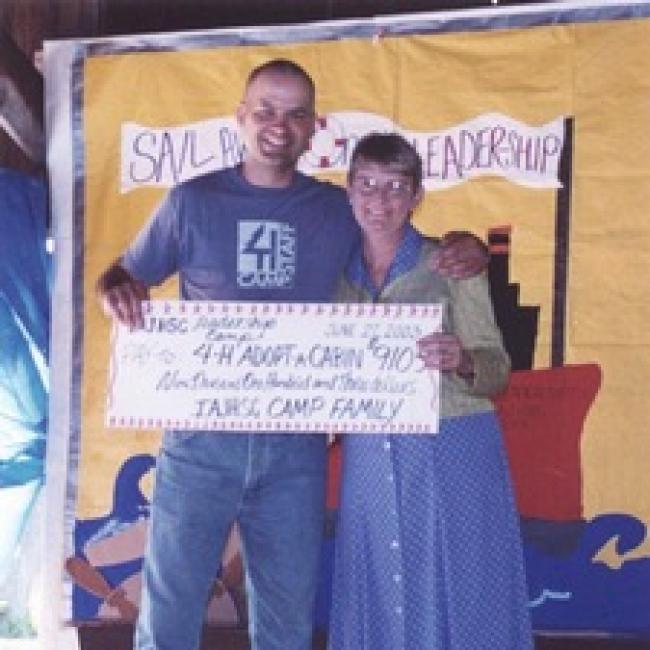 When it came time to refurbish buildings in the '90s, continued donations made it possible. Various construction companies provided discounted or free materials and labor to aid the construction projects.

Donors were also given the privilege to name a cabin, as 30 of the original cabins had to be rebuilt to renew structural integrity. Working with the College of ACES Office of Advancement and the Illinois 4-H Foundation, over $250,000 of funds were donated and then matched by operational dollars generated by programs at 4-H Memorial Camp to rebuild the original cabins. Curt Sinclair, camp manager and program director, said, "This opportunity allowed donors to share their appreciation and belief in the camping program. It also afforded someone the chance to carry their family's name and vision into the future."

Curt Sinclair, Camp Director, holds a check for $9,105 as part of the 4-H 'Adopt A Cabin fundraiser.

With future donations, 4-H Memorial Camp hopes to complete the Dining Hall remodeling project; rebuild all five bathhouse units; and add the program offerings of a swimming pool and trap shooting range. Tax-deductible donations can be given online or mailed.

Today, the program is as vibrant and alive as ever with over 9,000 campers participating in one of 129 camp events in 2013. Sixty-five years ago it would have been hard to imagine that over half a million 4-H Campers would have added a treasured camp memory from their experience at 4-H Memorial Camp.

Thanks to Robert Allerton, and many others along the way, our World War II 4-H heroes are not forgotten as freedom is celebrated each year at 4-H Memorial Camp.

Be informed. Ask a Question.